The Classical Conditioning of Notions

About an year ago, while I was traveling in the Delhi Metro, I witnessed a unique episode. Inside the coach, these sign boards appears over every corner seat 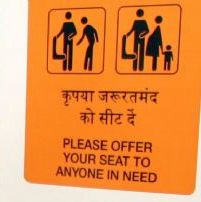 When I boarded, there was already an old aged Sikh couple sitting in the opposite row. A few stations later, a boy of almost the same age as mine, entered the train. The guy was carrying a lot of luggage. He was sweating heavily, huffing and puffing. He looked around in search of a seat, but there was none vacant. However, as the train rolled into motion, the old man got up, and asked this guy to take his seat. The boy hesitated initially, but the old man forced him to sit. I, and my fellow passengers, were a little surprised by the gesture.

Coincidentally, the old couple got off the train at the same station as I did. So, I casually went up to the man and asked him “What made you vacate your seat for a much younger individual?“. His reply was an eye opener. He said “I don’t think the sign boards tell you to give the seat to the person older than you. It tells you to offer it to someone who needs it more than you. And frankly, that young man needed it more.” And he walked away with a smile and a little pat on my shoulder, while I stood there feeling stupid.

At times, our notions become really stringent, and stupid. For every idea, we draw a picture in our minds. A picture that creates the recall value of that idea. And while that might not be such a bad exercise, the trouble is that the picture gradually becomes inseparable from the original idea. In fact, sometimes, it supersedes the idea itself. Just like old age and the idea of being weak.

Right through our lives, we nurture many such notions, some of them extremely illogical, and ridiculous at times. Like Black brings in the idea of evil. Like the idea of the eldest being the wisest. Like trendy people being seen as immature. Like Bachelors being considered irresponsible, or children presumed to be illogical. That’s how it’s apparently supposed to be. It is amazing, and appalling, to realize how easily our minds get conditioned with such notions. Doubts do creep, but there never occurs an urgent need to ration them out because everyone else around us is conditioned too.

To become socially fit, we adapt the norms that we once used to question. We give up the chances of being exceptional, in order to become acceptable. The classic example of this dichotomy is seen in parenting. All parents want their children to stand out, and yet force them do things exactly the same way as everyone else.

In trying to fit in, we compromise on our beliefs until they become completely obsolete, and on their tombstone sparkles the set of socially enforced norms, called “Traditions”. There is a certain section of the society that always tries to safeguard these at any cost. These men fought Galileo & Copernicus when they had claimed that the sun was the center of the solar system. They had rubbished Mendel’s theory of genetics. They opposed the abolition of child marriage, they tried to safeguard the “Sati Pratha”. They have forever tried to kill creativity, subdue logic, to suppress free thinking, to destroy opinions that contradict the status quo. They simply can’t accept being questioned, and wouldn’t even hesitate to hurt someone who challenges their paradigms. But in truth, a society that isn’t ready to be questioned is either headed towards a collapse, or a revolution.

There is no sure shot way for a society to be objective, always. However, one may do that on an individual level by constantly asking oneself  ‘WHY?’. By focusing more on the purpose than on the action. By following norms in principle, rather than in letter.

You may stand alone at times. You may confront your own people too. You may be called weird. That is a price you might have to pay. The price of being unorthodox. But then, orthodox people seldom create history.

The author is lazy & stupid. That's it. View all posts by Bhanu Pratap Singh